Bridging the gap between science fiction and reality

The promise of regenerative medicine seems torn straight from the pages of a science fiction novel: to combat injury and disease by regrowing cells and tissue. In recent years, researchers have made tremendous strides in augmenting our understanding of stem cells, bringing new advances in regenerative medicine tantalizingly within reach. In particular, the transdifferentiation of mature somatic cells—that is, their transformation from one cell type to another—could revolutionize the treatment of neural, cardiac, and pancreatic disease and trauma.

Directed transdifferentiation relies on “cell fate reprogramming,” whereby a cell of one type is converted to a cell of a different type. To date, the standard method of cell fate reprogramming is based on inducing an elevated concentration of suitable endogenous transcription factors. For reprogramming somatic cells into stem cells, a step often used to reprogram cell fate, this technique results in the majority of cells becoming only partially reprogrammed.

Biological circuits like those that power cell fate reprogramming have occupied a central role in the research of Dr. Domitilla Del Vecchio since she joined the MIT faculty in 2010. She and her co-investigator, Dr. Ron Weiss, hope to develop a synthetic genetic circuit that will enable cells to effectively control the concentration of transcription factors “as needed” during the reprogramming process. The team’s preliminary mathematical models indicate that this method will result in a substantially more efficient procedure.

Other researchers have devoted substantial amounts of time and energy to studying the reprogramming of cells for over 10 years, but the practical applications of the method remain hampered by inefficiency. As promising as the theory may be, less than 1 percent of the original cells complete the transformation into stem cells. This less-than-stellar track record has cooled investment in the field.

Drawing on her background in electrical engineering, Dr. Del Vecchio plans to approach this problem from a new angle: as a challenge of control design. How can the reprogramming process be reimagined in order to increase efficiency? This question inspired the team’s decision to insert a feedback mechanism into the cells that allows them to self-regulate the transformation process. And this out-of-box approach made for a perfect fit with the Bose Research Grant Program.

Thanks to cell fate reprogramming, lost or damaged cells can be replaced by patient-specific reprogrammed cells.” 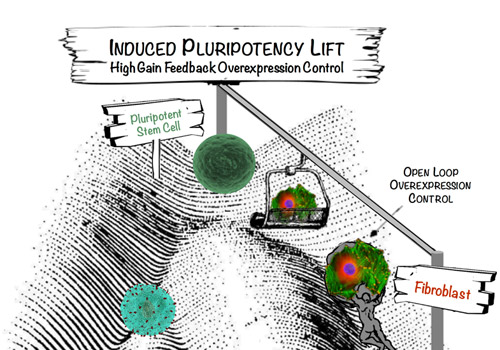 The Bose Fellows program is committed to funding projects that would likely be deemed unfundable by traditional sources. Yet “unfundable” is not a permanent status. For Dr. Del Vecchio, the Bose Fellows grant enabled her team to obtain preliminary results that led directly to a grant from the NIH. “This additional support enabled us to continue in our original direction while also exploring other avenues for achieving the desired results,” she says.

A key advance in the project was the development of mathematical models that help to explain the principles by which cells retain memory of their original phenotype before they divide. “This is a major new direction of research for me and my group,” says Dr. Del Vecchio. “Among other avenues we’re looking into with our collaborator Ron Weiss is the engineering of devices that could be placed in vivo to trigger cells to change from one type to another so they could either repair broken cells or replenish cells that are depleted.”

Being a Bose Fellow is both flattering and inspiring, she says. “At one event for Bose Fellows, I heard an old recording of Amar Bose talking about his vision and his beliefs. It’s easy to get discouraged when you’re doing this kind of research, but when I think of his words and his passion, I become excited with new energy.”