Practical constraints such as size, portability, heat, cost, and—perhaps most significant—safety limit the voltage and energy output that today’s fuel cell and battery technologies can achieve. Electrochemical reactions are required for producing energy; the more intense the combustion, the greater the energy output. Clearly, however, applications requiring a battery—whether a pacemaker, computer, or cell phone—must be able to bear the kinetics of the reaction without exploding. Unfortunately, despite the increasing demand for higher-voltage batteries to power electric vehicles and other products that need sustained high-energy output, researchers to date have been unable to produce anything more than incremental improvements.

I was inspired by combustion chemistries that first were explored for naval applications during the 1960s,” says Betar M. Gallant, Ph.D., assistant professor of mechanical engineering at MIT. “I had the idea that I could transcend the limits of today’s lithium-ion batteries by combining lithium, an alkali metal, with dissolved gaseous molecules, rather than the standard reactive materials used in conventional batteries and fuel cells.” The downside of this idea is that it would result in a reaction yielding such high voltage and high thermodynamic force that it would typically be considered unsafe. However, by bringing both chemistry and mechanical engineering principles to bear on the problem, Dr. Gallant intends to mitigate these concerns in two ways: by careful design of the electrode surface, and by developing a standalone electrochemical reactor with the capacity and performance metrics needed to control the reaction kinetics.

We embrace a ‘reaction by design’ approach wherein we target a molecule for its theoretical energy release, and then build the electrochemical reaction environment around it. Such an effort requires patience, vision, grit, and imagination, and can only be pursued in the unique intellectual context made possible by the Bose Research Grant.” 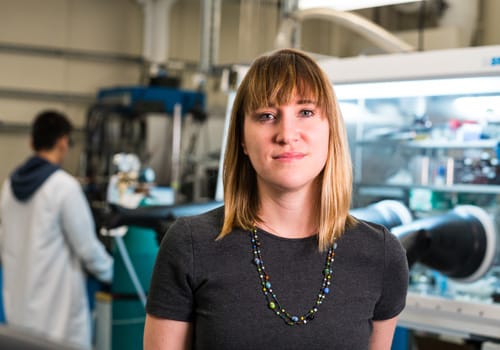 Making it safe, practical, and reliable

Dr. Gallant believes that the search for solutions to the limits of lithium-ion batteries has also been constrained by conventional funding sources, which are focused exclusively on electrified transportation; there is a reluctance to explore new chemistries that do not appear to meet all of the requirements of an electric car battery (such as being compact, lightweight, inexpensive, rechargeable, and robust). “I believe that innovation should precede application,” she says. “In other words, let the science drive the eventual utility, rather than the other way around.”

The other challenge is that the proposed reactions are based on highly exothermic processes that would conventionally be considered uncontrollable, or even violent, which renders them both scientifically and physically risky. For this reason, Dr. Gallant’s research plan is composed of three objectives: one focused on initiating and measuring the chemical reaction itself, and two focused on containing and controlling the reaction kinetics safely. 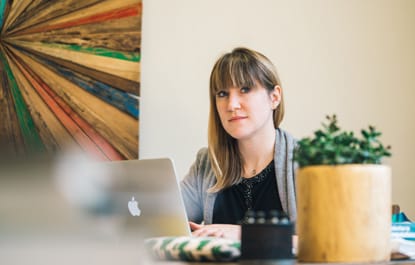 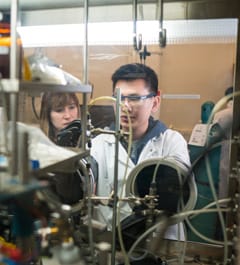 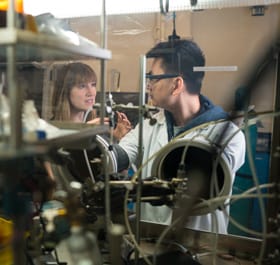 Dr. Gallant believes her research represents a leap forward in the complexity, chemical richness, and magnitude of energy delivery. By combining the discrete disciplines of chemistry and mechanical engineering, she is not only exploring the usefulness of reactive elements heretofore considered dangerous, but also doing so in a manner that isn’t limited to an existing process or application. “It’s risky,” she says, “but I’m committed to exploring the possibility that extreme combustion can be applied in a controlled manner to harness and produce high amounts of electrochemical energy safely. If I’m successful, this could open new pathways and concepts in the design of chemistries, reactors, and processes for stationary and portable power delivery.”

Power surges in the lab

Over the three-year grant period, Dr. Gallant’s lab found they were able to achieve some of their goals but not others—yet what they’ve learned from their research has opened up new avenues of exploration they are eager to pursue. “When we built the reactor,” she says, “we were pleased to learn that the reactions we were looking to generate could indeed occur. Thus, we were able to develop a high-capacity primary lithium-gas battery. However, the voltages were lower than expected: approximately 3 volts versus the expected 5.5 volts based on theoretical calculations.”

Exploring why the voltages were low led to new directions of study for Dr. Gallant’s lab. “We first examined the capacity issue, which is the extent of the reaction,” she says; “then we began to work on the voltage issue, which is the thermodynamics of the reaction and arguably even harder.” For the former, the team has been working to figure out how to better design the electrolyte environment, and has seen success; for the latter, they are focusing on the longer-term effort of cathode and catalyst design. “We’ve started to explore whether liquid reactants might work better than gas-based reactants. These explorations are opening up new potential applications for our work.”

Dr. Gallant feels very fortunate to have been chosen as a Bose Fellow in her first year as a faculty member. “The funding inspired out-of-the-box thinking that has become central to my research group, and showed me that Bose highly values innovative ideas . This experience has taught us to keep our eyes open and be ready for new opportunities along the research path.”