On the Same Wavelength

Brain waves were first discovered more than 100 years ago; today their existence is more or less common knowledge to laypeople and scientists alike. They arise from the synchronized electrical activity of neurons, and their frequency varies depending on your state of mind. Your brain waves actually hum a bit higher when you concentrate. Why? Well, no one really knows. Dr. Earl Miller says the study of brain waves has fallen out of fashion within the neuroscience community. This is largely because technical limitations have prevented scientists from studying multiple neurons at once, restricting our ability to investigate the influence of brain waves on cognition.

At MIT, Dr. Miller and his team are pioneering innovative techniques for the study of hundreds of neurons simultaneously, opening the door to a broader study of the rhythms of thought. Early data indicates that these rhythms may play a much more important role than anyone had anticipated, serving as a key method of communication within the brain. Now Dr. Miller hopes to elevate this line of inquiry to an entirely new level by using transcranial electrical stimulation (TES), a safe and inexpensive technique, to enhance these rhythms and gain what could be unprecedented insight into their function – a function that Dr. Miller believes could one day provide therapeutic benefits to those suffering from neuropsychiatric disorders.

How can you know what you don’t know?

The study of rhythms rather than neurons represents uncharted ground in the field of neuroscience, and despite the mounting evidence that they are important to cognitive function, there’s no way to tell exactly what manipulating them will achieve. This results in a sort of catch-22 for Dr. Miller and his team. “Without preliminary data supporting the efficacy of TES,” he says, “we can’t secure funding. And without funding, we can’t perform the research required to gather that data.”

If we’re successful, this research could have a deep and immediate impact on therapies to improve cognitive function.” 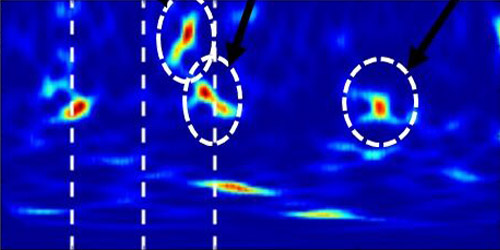 Dr. Miller believes brain waves may explain why people are able to remember millions of bits of information, but are only able to pay attention to three or four things at once. If the waves are the brain’s mode of internal communication, this makes sense – the high-frequency oscillations have a limited bandwidth that would hinder our ability to multitask. Using TES, Dr. Miller hopes to expand that bandwidth and thereby increase cognitive capacity.

But better multitasking is just the tip of the iceberg. Many debilitating neuropsychiatric conditions are characterized by limited cognitive bandwidth. “There’s growing reason to believe that disorders such as autism, ADHD, and schizophrenia may not be caused by damaged structures in the brain,” Dr. Miller says, “but instead by communication issues within the brain.” He hopes using TES to modify this communication might set the stage for new medical approaches for treating these conditions.

“In this field,” says Dr. Miller, “conventional research looks at individual neurons; scientists seek to understand the brain by looking at it from the perspective that it is composed of billions of tiny gears. Prior to receiving the Bose grant, we were flirting with the idea that brain rhythms could have a role in brain function. The work that we were able to do thanks to that grant has now moved us solidly and boldly in this new direction.”

By using TES on animal subjects as well as simulations, the Miller lab will soon be able to document evidence that changes how we look at basic cognitive function. “We believe we are in the middle of a true paradigm shift, which is beginning to be documented in high-profile publications,” he says. “This is now our major focus and I have added more people to my lab, people with skills in computational theoretical modeling and analysis. Furthermore, we now have results that can help us get additional funding; we just submitted two grants to the NIH based on our work on brain oscillations.”