Intrinsically, computational microscopy is better than going with the flow

Measuring the characteristics of cells and cell systems (known as cytometry) is essential in biological research and medical diagnosis applications. A common and extremely powerful method called flow cytometry works by having cells flow one-by-one past a laser and detector; certain molecular factors of each cell can thus be measured and extrinsically tagged with fluorescent marker. This makes it possible to identify very precisely certain types of cells in a sample of blood based on the number of markers they possess, including individual stem cells and cancer cells.

However, this process, while comprehensive, requires preparing the sample, which slows things down. Instead of relying on extrinsic markers, researchers are also able to make assessments of cell characteristics based on intrinsic properties such as size and shape, which require no tagging. While each individual intrinsic property can be measured using a dedicated device, there is currently no equivalent method to flow cytometry to measure a number of these properties on a per-cell basis. That is, it’s easy for scientists to measure diameter or mass independently, but it’s hard to keep track of which As such, it is difficult if not impossible to find a combination of properties that might be useful for further study.

There are two possible solutions,” says Dr. Joel Voldman. “One is to gang multiple devices together, where each one measures a different property. The problem with that approach is that you can’t keep track of the cells as they pass from device to device. The second option is to integrate the devices onto a single chip about a centimeter long. The problem there is the same because a conventional microscope has a field of view of only about one millimeter.”

Call it the Goldilocks Syndrome or third-time-lucky, but Dr. Voldman believes a third option would be just right: a computational imaging system using advanced algorithms with a field of view the same size as the chip. “This would be able to track cells as they encounter different measurement regions; in essence, we’d be taking movies of the cells as they traverse the chip and then using algorithms to track their identity, allowing us to create a correlated map of the cells’ intrinsic properties,” he says. If only it existed.

A newly developed microfluidic chip for the multi-parameter measurement of cells’ intrinsic properties, including size, deformability, and electrical polarizability at three different frequencies. 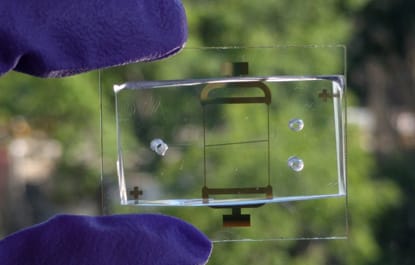 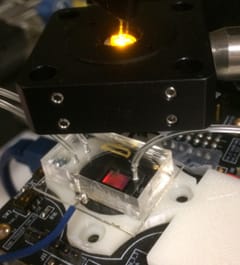 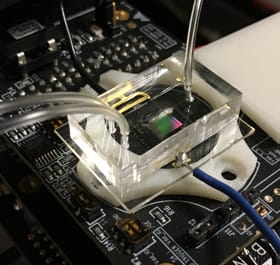 Building this new computational microscopy imaging system and taking it for a spin is a three-stage process:

“The reason the proposed research is hard to fund is that creating the intrinsic cytometer is essentially a fishing expedition,” says Dr. Voldman. “Although it has been established that measuring extrinsic properties via flow cytometry improves the ability to discern populations within cells, there is little data that says that this scaling will hold for intrinsic properties. Additionally, there is substantial skepticism that intrinsic properties are even useful, due to their low specificity. I argue that the reason that intrinsic properties have limited current utility is that they are almost always measured one at a time. I think we can do better but in today’s funding environment, our approach would be considered too risky.”

I view this new research direction as a way to bring optics back into my research portfolio.” 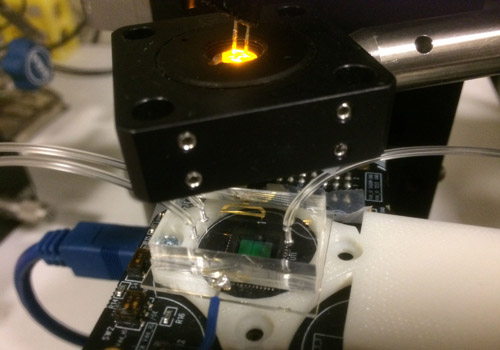 Benefits for science, and for scientists

Dr. Voldman believes his project will offer two benefits to society: one from the work he is able to do with his intrinsic cytometry system, and one from broadly disseminating its specifications. “If we can create an intrinsic cytometer, I am optimistic that we will find examples of biologically or clinically useful cell populations to which it can be applied,” he says. “Flow cytometry has been applied to applications far beyond what it was initially envisioned for and I see that occurring with intrinsic cytometry as well.”

While computational microscopy is regarded as an important breakthrough in the microfluidics community, its use has been restricted to a handful of groups, because the code and other details are rarely shared. “I want to see this method widely adopted,” Dr. Voldman says, “and the way to do that is to freely disseminate. This involves posting on our website a how-to guide for creating and validating a system, including part numbers, written and video instructions, runnable code, drawings for a microfluidic test device, etc. In doing so, we will have widespread impact as others adopt this enabling technology.”

Using a different type of accelerator known as a cyclotron, which whips particles up to speed in a spiral—and more important, is only a few dozen meters across. This hypothetical technology would be much more flexible and cost-effective than existing large-scale facilities.

Over the course of the funding period, Dr. Voldman’s team constructed an initial system that successfully tracks certain classes of cells as they move through it. They are continuing to refine this prototype technology as they build a database of the different cell properties they hope to detect. Just as important, their ability to leverage computational imaging in this context opens the door to next-generational approaches to studying cells at the microscopic level. “In a lot of our research, you have to image the cells to determine what’s going on,” Dr. Voldman explains. “This technique won’t replace the big, bulky microscopes in every instance, but it does provide a more efficient approach to some types of cellular imaging.” He hopes that one day this type of imaging could significantly enhance our ability to identify cell types in a medical context, which may have implications for detecting or treating disease. As Dr. Voldman puts it, “We are just as excited about the potential of this research today as we were when we began.”