The world’s reliance on fossil fuels is a problem, both for the environment and for long-term supply. Sustainable, renewable sources of energy such as solar are believed to be the solution. But what if we took the dirty, destructive aspects of carbon-based energy generation out of the equation? Or, as Dr. Jeffrey Grossman frames the question: “Is the burning of carbonaceous materials the only way in which carbon-rich sources can be tapped for energy?” He proposes it could be possible to harness the energy within carbon without using combustion, thereby turning natural substances such as coal, tar, bitumen, or kerogen into renewable resources.

According to Dr. Grossman, there is reason to believe in coal as a replacement for silicon in such applications as photovoltaic solar cells. “From a materials point of view,” he says, “coal possesses three of the most important attributes for large-scale use in photovoltaics: low cost, wide availability, and extreme flexibility. They also can be conductive as well as insulating, have excellent light-absorption properties, and require far less processing than current materials.”

In spite of that, 90 percent of solar cells today are made out of silicon, which has significant disadvantages. For one, it doesn’t actually absorb light very well so it has to be manufactured thick. Also, it requires a glass substrate because of the mechanical properties and temperatures needed to make it work. As a result, it’s heavy and inflexible, and not particularly efficient. “A typical silicon solar cell is 100 microns thick,” says Dr. Grossman. “By contrast, a carbon solar cell could do the same work and be only 100 nanometers thick—1,000 times thinner than silicon.”

Traditional funding sources will give you a lump of coal

Despite the apparent potential of coal as a renewable energy source, associating it with photovoltaic devices requires a major shift in thinking. After all, it’s practically the poster child for the harm that fossil fuels do to the environment. Says Dr. Grossman, “Currently coal is considered a low-tech fuel to burn rather than a resourceful material. Because of that, it’s highly unpopular. Our aim, to demonstrate that coal can be used to make solar cells, is unlikely to be funded by traditional sources, which would consider such a concept far too risky. We believe the Bose Research Grant is the only way we could explore this potentially game-changing technology.”

We absolutely never would have done this without the Bose Research Grant because it was too risky and it’s hard. Now we’ve developed the first-ever database of coal constituents—up to 20,000 carbonaceous materials in all—and are fielding inquiries from the coal and energy industries, and other academic institutions.” 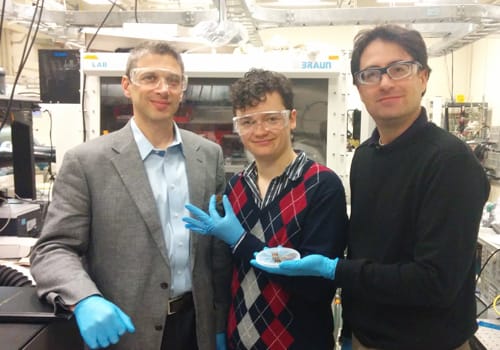 Prior to applying for the Bose Research Grant, Dr. Grossman’s lab had been working with carbon in the form of carefully produced nanostructured components including nanotubes, fullerenes, and graphene sheets. The problem was that they were prohibitively expensive to procure. “My colleague, Donald Sadoway, says, ‘If you want to make something dirt cheap, make it out of dirt,’” says Dr. Grossman. “So we began to look at carbon in its more natural state.” What they ended up doing was getting coal from the Penn State Coal Bank, grinding it into 10-nanometer balls, and lightly processing them into a film that is easy to work with.

“We need to create a clean, safe, renewable way to obtain energy that could last not just another 50 or 100 years but as long as the sun itself,” he says. “The key is our ability to design and utilize new materials. A successful demonstration that it is possible to use cheap, abundant, naturally occurring forms of carbon such as coal would represent a dramatic shift in the way we think about these precious resources.”

Sharing the spotlight for fueling progress

The outcomes to Dr. Grossman’s research are varied and exciting. “I had a student, Brent Keller, who built at least half of his PhD around this,” he says. “Over a span of two years he made the first-ever devices out of coal films. Together with a research scientist in the group, Dr. Nicola Ferralis, he showed that with just one parameter—temperature—you can change the conductivity of these coal films by seven orders of magnitude, making them competitive with the best carbon conductors in existence.”

The prototype is a simple electrical heating device that could be used for defrosting car windows or airplane wings. Their findings were published in the journal NanoLetters, which led to an inquiry from Exxon. “They said, ‘We like carbon and we’d love to hear more of what you’re doing; we want to invest in clean tech and we think this is interesting,’” says Dr. Grossman. “They gave us funding for one year and just renewed it for three more years—all based on the work that the Bose Research Grant made possible.”

Dr. Grossman’s team was subsequently included in a substantial proposal submitted to the Department of Energy by a group within the coal industry that hopes to develop coal as a structural material. “They saw our work under the Bose Grant,” he says, “ and were inspired to rethink the applications of coal—just as we were.” As for using coal to power a solar cell, a more sophisticated problem, Dr. Grossman’s lab is working on that now. “I’m very grateful for this incredible opportunity to try something crazy,” he says. “I’ve had a lot of things in mind that I’ve wanted to do, but that we haven’t been able to do. Now we can.”