In microscopic etching, there’s more than meets the eye

Silicon wafers form the nearly ubiquitous substrate that underlies modern microelectromechanical and nanoelectromechanical systems (MEMS and NEMS). To prepare them for functional use, these wafers undergo a process called “etching” in which they are shaped and carved with microscopic grooves for their specific purposes. Etching is a chemical process, one that typically involves the use of xenon difluoride (XeF2) gas. Dr. Sylvia Ceyer was curious to discover why XeF2 is so successful at etching the silicon surface, yet fluoride (F2) gas is not. She concluded that it was a question of mass.

“XeF2 is four times more massive than F2,” she says, “and importantly, XeF2 is more massive than the effective mass of a silicon atom as well. So when XeF2 collides with the silicon surface, the momentum creates the desired deformations of the silicon lattice. F2, on the other hand, just bounces off because of its much smaller mass.” If she could increase the mass of the F2 molecule so that it hit with the same force as XeF2, it would prove her hypothesis and help to create a deeper understanding of what’s really happening when XeF2 is used to etch silicon.

To put her hypothesis to the test, Dr. Ceyer’s lab designed a unique apparatus called a molecular beam ultra-high vacuum surface scattering instrument. “Maybe one or two other apparatuses in the world exists on which our experiment could be carried out,” she says. The critical feature is the molecular beam, which allows the formation of a new molecule comprising two molecules very weakly linked together: in this case, xenon (Xe) and fluorine (F2). The resulting Xe(F2), which is composed from the same elements as the very stable molecule XeF2. should have the same effect as XeF2 if mass is the critical parameter in the etching. Indeed, preliminary investigation has shown it to be equivalently effective at silicon etching.

“Despite our preliminary results, it has been very difficult to fund our proposal,” says Dr. Ceyer. “Ours is a non-traditional view: Convention holds that all chemistry is dictated by electronic structure, but I believe that mechanical forces can play a major role in activating the reaction.” Another reason for the difficulty in funding her research is that dry, plasma-free etching of silicon by XeF2 works perfectly well. Yet still Dr. Ceyer believes there is more to learn about this process. “In my mind, a unique fundamental dynamical phenomenon is operating in this reaction,” she says. “We have started to unravel an intriguing physical origin of solid silicon reaction chemistry at the very least—and at best, a more generally applicable and previously unknown chemical principle.”

I view the uniqueness of XeF2’s chemistry as a thread dangling from an otherwise neat fabric of ideas about chemical reactivity—a view that does not conventionally include classical mechanical effects, such as deformation.” 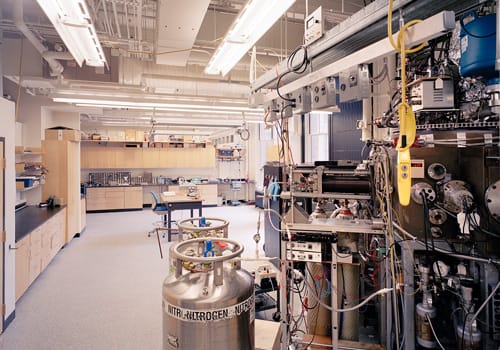 “It seems that we have been able to increase the reactivity of molecular F2 gas simply by making the F2 molecule more massive,” reports Dr. Ceyer. “If our preliminary results hold, then this experiment is the first demonstration in the history of chemistry of controlling chemical reactivity simply by increasing the mass of the molecule while maintaining the chemical interactions.” Dr. Ceyer believes that the fundamental principle behind the high etch rate of silicon by XeF2 begs to be discovered. If her hypothesis is confirmed, then MEMS, NEMS, and photonics engineers will have a novel tool for surface layer patterning or for etching surfaces into unique shapes to enable silicon photonics.

The three-year Bose Fellows grant period has ended but an exciting new period is just beginning for Dr. Ceyer’s research. “We still are working on some preliminary results that look like our idea was correct,” she says. “Those results enabled us to win a grant from the National Science Foundation to keep our work going. We’ve also expanded the scope of our discovery to include not just etching of silicon wafers but also oxidizing—in essence, we’re able to use our original apparatus not only to remove material but also to add material, which is important to the development of semiconductor devices.”

In a time when much scientific research is pressured to uphold some organization’s bottom line, Dr. Ceyer finds it refreshing that the Bose Fellows program supports inquiry for the sake of it. “It’s very exciting to feel that curiosity-driven research is important, that someone is willing to take a chance on a way-out idea. Without the Bose grant allowing us to build results, I’m not sure the NSF would have taken a chance on us.”