Hiding a drug within a beneficial nutrient

Like all other living organisms, bacterial pathogens have to eat. The more they eat, the more they replicate, and the sicker their human host becomes. However, given the prevalence of bacterial infections and the fact that an estimated two million Americans suffer from drug-resistant bacterial infections each year, it is apparent that certain bacteria are very skilled at acquiring their essential nutrients from the human host. Dr. Elizabeth Nolan is leveraging her past work to trick bacteria into feeding on toxic drugs by hijacking bacterial systems that enable the acquisition of iron, an essential metal nutrient. “Bacteria secrete small molecules called siderophores that serve as iron scavengers, using receptors to recognize iron-siderophore complexes and then employing intake machinery to uptake them,” she says.

Gram-negative bacteria (which include Escherichia coli and Salmonella) are particularly antibiotic-resistant; infections caused by these organisms can be difficult to treat because they have an outer membrane that limits uptake of certain drugs. The outer membrane, however, is also where the iron-siderophore receptors are located. “We theorize that using cisplatin, a platinum-based anticancer agent, as a trojan horse that would target those receptors while carrying an antibiotic cargo will allow us to trick bacteria into eating something poisonous,” says Dr. Nolan. “We believe that the siderophore receptor will recognize the siderophore moiety conjugated to a platinum anticancer agent as food and take it in, allowing transport across the outer membrane and allowing the platinum cargo to ultimately kill the bacteria.”

I love using chemistry to address biological problems. This project gives us the chance to create new molecules that haven’t been made before and see what they can do.” 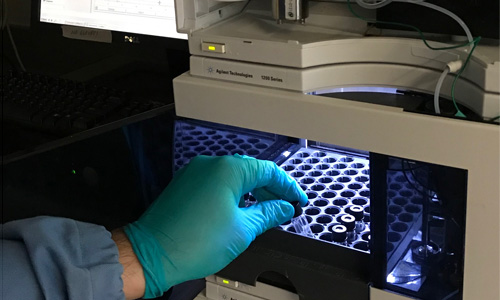 Dr. Nolan’s experiment—using toxic cisplatin-siderophore conjugates to selectively inhibit bacterial cell growth—represents a new, unconventional approach for fighting bacterial infections in humans. One of the key risks is the fact that the anticancer drug is toxic to humans. However, by converting the cisplatin molecules into narrow-spectrum antimicrobial agents that can target a particular subset of bacterial species, Dr. Nolan hopes to observe minimal toxicity to host cells and minimal damage to the host’s microbiome. And yet, she explains, “While we have plenty of textbook knowledge about platinum-based anticancer agents, we have not worked with them in the past, and we have limited experience with testing siderophore-antibiotic conjugates in animals.” It is quite likely that traditional funding sources would find these risks unacceptable.

If successful, Dr. Nolan’s work may provide a toolkit for repurposing other clinical medications to fight bacterial infections. Targeting bacteria’s siderophore apparatus provides an inherent selectivity that may allow trojan horses to succeed where conventional approaches fail. As antibiotic-resistant infections increase, there is an urgent need to avoid a “post-antibiotic era” that would be as deadly as the pre-antibiotic era. Says Dr. Nolan, “I love using chemistry to address biological problems. This project gives us the chance to create new molecules that haven’t been made before and see what they can do. I think it will be very interesting to see how this experiment will influence my other research projects. I know it will, but to what extent remains to be seen.”