The Future of Flight

Dr. Steven Barrett is researching new methods to propel drones (and perhaps eventually larger aircraft) through the electroaerodynamic (EAD) manipulation of air—and envisions flights of the future achieving liftoff without moving parts such as turbines or propellers. While the idea may sound like science fiction, its physics are grounded in a concept called “ionic wind,” which was first investigated over a century ago. “Ionic wind is generated by pairing electrostatic body forces and a neutral fluid, such as air,” says Dr. Barrett. “When ions in the air are under the influence of an applied electric field, and then collide with neutral molecules, they impart momentum and generate wind—enabling flight with a thrust-to-power ratio similar to jet engines.”

While Dr. Barrett’s focus is currently on getting small drones airborne, larger aircraft could conceivably take to the skies through similar means. EAD slipstream propulsion has the potential to generate propulsion around an entire aircraft, so that a plane would be in a sort of “propulsive skin” with no separate thrusters or engines, wasting less of the unnecessary kinetic energy that conventional jets leave in their wake. “While I don’t know if we’ll see this technology propelling large aircraft carrying people anytime soon, it’s an exciting possibility,” he says.

The fundamental design of aircraft hasn’t changed in over 100 years. This is an exciting investigation into whether the future of flight could look fundamentally different.” 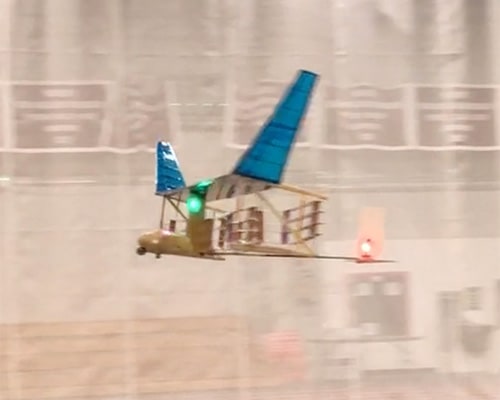 In 2018, Barrett’s team successfully designed and flew an EAD prototype in the DuPont Gymnasium at MIT—the first heavier-than-air, solid-state flight. The aircraft was 15 feet in wingspan and weighed five pounds, and the EAD propulsion system was hung under its wings. “While our prototype was a long way from perfect, it was a promising start,” he says. “Now we need to begin working on the next generation of the technology, which has never really been tested before.”

Dr. Barrett’s research is focused on the potential environmental and economic benefits of EAD propulsion. If successful, it could enable autonomous drones to provide vital services without contributing to noise pollution—especially as drones become more common tools for delivering products, monitoring traffic, and providing security.

“The fundamental design of aircraft hasn’t changed in over 100 years,” he says. “This is an exciting investigation into whether the future of flight could look fundamentally different.”