Innovation-rich solution for a resource-poor area

Of all the environmental perils facing the planet, contaminated drinking water is one of the most dire, since water is necessary for survival and countries where the water is poisoned likely also have substandard medical care. Inspired by the successful eradication of Guinea worm disease through the use of nylon fabric to filter parasites out of drinking water, Dr. Julia Ortony, the Finmeccanica Career Development Assistant Professor of Engineering at MIT, set her sights on the catastrophic problem of arsenic-contaminated drinking water in South Asia—described in Science magazine as “humanity’s biggest mass poisoning”—which is responsible for more than 43,000 deaths per year in Bangladesh alone.

Arsenic acids, composed of just eight atoms, are much smaller than parasites so a textile-based solution would have to use nanoscale fibers. In addition, the fiber surfaces would need to be capable of grabbing onto arsenic species and removing them from water. Dr. Ortony has developed a method of creating self-assembling, mechanically robust nanofibers with high surface area that remain stable both in water and in air. The solution would be more practical and affordable than current arsenic-filtration systems that are large, bulky, and expensive, which make them difficult to employ in the most highly affected communities in rural South Asia. “In order to be effective,” she says, “the solution has to be low-tech from a user’s perspective, but state-of-the-art from a materials perspective. We plan to do just that.”

In order to be effective, the solution has to be low-tech from a user’s perspective, but state-of-the-art from a materials perspective. We plan to do just that.” 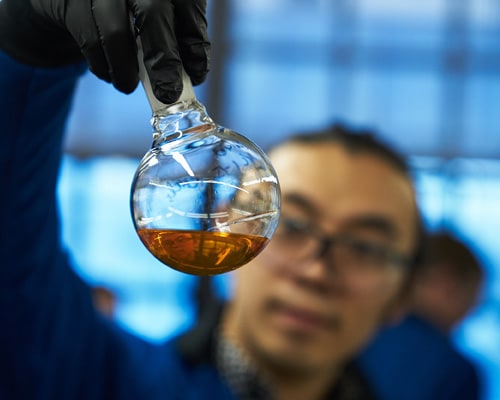 As of this writing, Dr. Ortony’s lab has so far demonstrated the proof-of-principle experiment showing the ability of their nanofibers to sequester arsenic in a sample of contaminated water, but there is still work to be done. How effective does it have to be to be considered effective? “The World Health Organization’s arsenic limit is 10 parts per billion,” she says. “We are aiming for below 10, and would ideally reach below 1 part per billion.” Dr. Ortony’s solution has not been able to receive funding from the NSF or the NIH. “This work is difficult to fund because it is new and does not fall into any of their previously established research areas,” she says. “In addition, there is a conspicuous lack of funding for research to address the arsenic poisoning epidemic, despite the enormous human suffering and loss that it is causing right now.”

Saving lives and the environment

According to Dr. Ortony, “Developing non-polymeric supramolecular materials in the solid state could have enormous applications beyond the proposed research—such as for lead remediation and targeting of other heavy metals. This is a new material class that needs to be explored further.” She also believes that in applications where carbon nanotubes are currently indicated, these new materials could be alternatives that would have the advantages of being more easily processed and more environmentally friendly. “This project represents a significant shift in our research program and in the field of molecular materials in general,” she says. “I foresee this research laying a foundation for my lab over the next five years or more. I’m excited about the solutions to environmental and human health problems that this project will uncover, and also for the opportunities that the Bose fellowship will create for my students.”