Happiness is a warm wire

Wires and cables have been used to transfer electricity since the 1800s. Could heat be transported in a similar fashion? Dr. Evelyn Wang is researching new methods to develop “thermal wires” that could stretch for kilometers to provide warmth to homes, offices, and entire cities more efficiently than traditional solid-state ventilation and heating systems. “We see wires transferring electricity everywhere,” says Dr. Wang. “I’m investigating methods to make long-distance heat transmission just as ubiquitous.”

Her proposed thermal wire would use a passive, closed-loop system to interface directly with heat sources—such as geothermal and solar thermal power stations—and transport and channel heat while consuming less primary energy than conventional methods. “Solid-state systems like heat pipes are not effective transporters,” she says. “We’re investigating ways to configure these wires for maximum distance, minimal loss, and ultimate efficiency.”

In lieu of solid-state devices, Dr. Wang’s team is employing liquids that undergo phase change to take advantage of latent heat—the energy required to convert a liquid into a vapor (or a solid into a liquid or vapor) without a change in temperature. Due to the high latent heat, the heat transfer along the wire will be very efficient and many magnitudes higher in effective thermal conductivity compared with even the most conductive solid: diamond. In addition, a sub-component of the wire will use a flexible, super-insulating layer to minimize heat loss over large transmission distances.

I came up with the idea on a cold night. I was thinking about how much heat is wasted through conventional systems, and began brainstorming ways to develop architectures that could transfer and release heat more efficiently.” 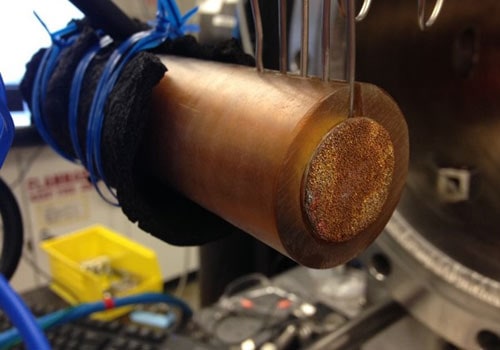 This concept of a long, flexible thermal wire is a highly exploratory endeavor that has never been attempted before. Funding from traditional government funding agencies is therefore challenging because they typically require some demonstration of feasibility. Dr. Wang believes it imperative to develop a prototype by the end of the three-year program, after her team completes their analysis of the wire’s design. “It’s something that I don’t think people will believe until they see it,” she says. “Our preliminary analysis is a promising start for our prototype, and we’re fortunate to have the advanced manufacturing capabilities to build the nanostructure—and, of course, the funding that gives us the flexibility to pursue such an adventurous project.”

As thirty percent of all energy consumed in U.S. buildings is used for heating, cooling, and ventilation applications, Wang’s envisioned thermal distribution network could significantly decrease energy consumption and provide a more sustainable solution to current practices—along with cheaper heating bills. “Unsurprisingly, I came up with the idea on a cold night. I was thinking about how much heat is wasted through conventional systems, and began brainstorming ways to develop architectures that could transfer and release heat more efficiently,” she says. “After developing the prototype, my goal is to work with cities and industries to invest in manufacturing and employing these wires on a large scale.”