Breaking Away From Legacy Catalysis

Using electric fields to power a new direction in catalysis

Catalysis—the process of accelerating chemical reactions via the introduction of a substance that is not consumed in the reaction—is a basic part of chemistry and foundational to the ability to create useful compounds and products as a result of those reactions. Outcomes can be changed by altering variables such as temperature, pressure, concentration, etc. With increasing demands for sustainability, scale, and atom economy, the search is on for new catalytic materials. Dr. Yuriy Román is looking to the past to envision a new paradigm for enhancing catalytic efficiency and product selectivity by using electric fields to modulate thermal catalytic reactions.

More than 30 years ago, MIT professor Constantinos G. Vayenas, PhD, discovered the electrochemical promotion of catalysis (EPOC) effect, in which the catalytic rates of some gas-phase reactions could be increased by more than 70-fold by electrically polarizing metal catalysts supported on solid ionic conductors. “I did a literature review on the subject and came upon a paper of his from the 1970s,” says Dr. Román. “We were very interested in following up on his work, but the complexity of the reactor design was an obstacle. We sent Prof. Vayenas an email and he kindly offered for us to visit his lab in Greece. From there, we obtained the basis of how to build these very specialized reactors.”

Taking that earlier discovery and adding things that are known now but weren’t known to Dr. Vayenas at the time—such as how to better design catalysts at the molecular level—Dr. Román and his group have developed a working prototype that interfaces thermo- and electrochemical components with in situ spectroscopy. “Building the first generation of this reactor was a key step, and that’s done,” he says. “We look forward to continuing our work and gaining fundamental understanding of the influence of electric fields in altering reaction rates and pathways through the design of novel catalytic interfaces.”

With the Bose grant, I now feel a sense of empowerment. Regardless of the outcome, it has brought the feeling of fearless discovery back to me.” 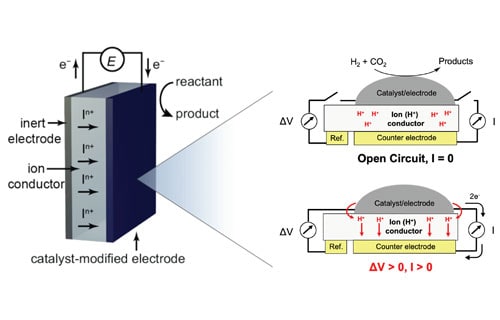 No funds for construction

“Our work hinges on the construction and optimization of the proper reactor system,” says Dr. Román. “And it’s challenging: the reactor has to be able to run at high temperatures and pressures, but also integrate electrochemical components at the same time. It’s hard to get funding for this kind of work; traditional funding agencies are hesitant to fund prototyping stuff. Furthermore, funding for reaction engineering has been on a steep decline over the last 10 years. For that reason, the Bose grant is itself like a catalyst, lowering the barrier for us to explore a brand-new, high-risk direction.”

The promise of a positive reaction

According to Dr. Román, the implementation of electro-catalysis in thermal reactions will allow researchers to achieve a level of control that is difficult to attain under typical conditions. “An electric field can be controlled very precisely,” he says, “and it can modulate catalytic pathways by changing the thermodynamic landscape of surface species coverage, preferred orientation of molecules, migration of ionic species with higher local activities, and the stability of transition states…all things you can’t easily do thermally. It can also extend the lifetime of catalysts. I believe this work will provide an orthogonal reaction handle on top of the usual techniques used in thermal catalysis, ultimately allowing us to improve existing processes and enabling people to make things faster, easier, and cleaner.”

“I always wanted to work on this topic,” he continues, “but I was afraid because it would be brand new to my group and I didn’t have the means to do it. With the Bose grant, I now feel a sense of empowerment. Regardless of the outcome, it has brought the feeling of fearless discovery back to me, so I am very excited to finally be doing the work I’ve been wanting to do.”